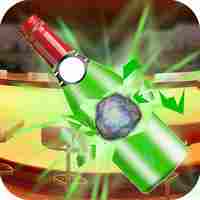 Bottle shoot game APK for android mobile [tablet]. About 15 million downloads and over 1.5 million active app installs. If you like shooting and broken glass sound? Then try this 3d effect bottle shooting/Blast game on the go. The 3D effects in the game are very cool. In this battle, you need to destroy the bottle to get points.

However, Bottle Shoot is about broke as many bottles as possible in the limited manners of time or tries. If you slightly do that you become a real Bottle shooter. This game contains many levels and every level gets harder than the last one.

Bottle shoot is fully fun play and addictive game on your Android device. Just download it on your mobile or tablet and enjoy the 3d visual effects on the rest.

Smash many bottles as you can don’t waste your time, where the game is over when the time ends. Aim properly and smash all the beer bottles in order to enjoy high quality sounds with crashes.

Game rules are basically simple. You have to throw the moving stone towards the bottle and try to smash/Blast a bottle in every try.

Also, you can break two or more bottles at the same time. You need the stone Swipe your finger to throw a stone to break bottles. Bottle shoot game for all Android mobile phones and tablets.